The Dept. of English and Creative Writing welcomes Professor Roy Pérez to Dartmouth for his lecture titled, "Canal Latinx: Queer Flows of Racial Reckoning in the Aerial Zones." 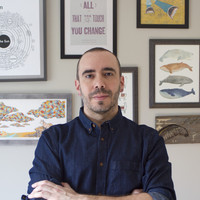 The inland waterways of Miami and Los Angeles weave like arteries through urban and suburban landscapes, linking communities across race, culture, and class. As metaphorical tributaries of national borderlands, these inland “arterial zones” are sites of racial proximity and, often, of shared exposure to toxicity and environmental fallout. “Canal Latinx” is a way of perceiving latinidad as part of a chain or sequence of interlinked racial, sexual, and national formations spreading across these arterial zones. Through the activism of South Miami environmentalists, the writing of Cuban American author Jennine Capó Crucet (Make Your Home Among Strangers), and the photography of the late Chicana lesbian artist Laura Aguilar, this talk exposes the fear of queer, cross-racial contamination that flows through majoritarian notions of latinidad, and the ways in which queer artists and activists find refuge and power in the arterial zone. The Los Angeles River and the canals of Southwest Miami serve as literal sites of racial proximity and shared experiences of environmental destruction, and as ways of perceiving the subterranean ideologies that try to protect latinidad from racial and sexual incursions. This research is part of Proximities: Queer Configurations of Race in Latinx Literature and Performance, a book-in-progress on queerness and cross-cultural representation in Latinx writing, performance, and visual art.

Roy Pérez is an assistant professor of Ethnic Studies and Critical Gender Studies at the University of California, San Diego. He teaches and writes about gender, sex, and race in contemporary literature, art, and performance. His poems and essays have appeared in Trap Door: Trans Cultural Production and the Politics of Visibility (MIT Press, 2017), Narrative, Race, and Ethnicity in the United States (OSUP, 2017), Women & Performance: a journal of feminist theory, the Best of Panic! poetry anthology, Bully Bloggers, and FENCE Magazine, and he is co-editor with Kadji Amin and Amber Musser of “Queer Form,” a special issue of ASAP/Journal. He is writing a book about art, race, and queer intimacy in Latinx culture titled Proximities.

This lecture is free and open to the public.

Events are free and open to the public unless otherwise noted.